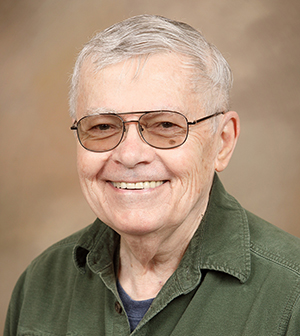 After graduating from Michigan State University in 1965 with an undergraduate degree in Political Science including concentrations in Economics and History, dropping out of Indiana University’s Russian and East European Institute in 1966, driving taxicabs in Bloomington, Ind., and marrying Diana, the love of his life, Dr. Blome – like most young men of the era – found himself in the Armed Forces. The Air Force kept him occupied for 20 years and he became “rather adept at maintaining, operating, and insuring the safety of what we now call ‘weapons of mass destruction.’”

Seeking some excitement after retirement in 1988, he obtained an MA in Management from Troy State University and studied Information Technology and Decision Sciences at Florida State University. After 20 years at Mercer, those disciplinary pursuits led him to the Informatics Program here in the College of Professional Advancement.

Dr. Blome and his wife have received a great deal of personal fulfillment raising a family and becoming grandparents.

His current interests are in developing a panoramic, cross-disciplinary perspective for Informatics that ties all course offerings into a coherent portfolio with an overarching theme: “the capture, storage, and processing of digital data to create information useful in decision-making.”