Associate Professor of Science
Department of Mathematics, Science, and Informatics 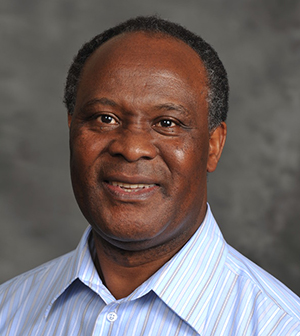 After having completed a three-year study in agriculture at the University of Malawi and degrees at Colorado State University, Dr. Vokhiwa worked as a livestock officer for the Ministry of Agriculture and Natural Resources in Malawi from 1975 to 1992. He worked as Deputy Director of Environmental Affairs since 1996 in the Ministry of Research and Environmental Affairs in Malawi after he completed his doctoral studies at Colorado State University. His doctoral dissertation was on ecological disturbance where he investigated “Carbon and Nitrogen Dynamics in Protected and Grazed Short-Grass Steppe in South-Eastern Colorado.”

As deputy director of environmental affairs, he was Malawi’s Desk Officer responsible for the United Nations Convention on Biological Diversity (CBD), United Nations Agenda 21, The Wetlands Convention, and UNESCO Man and Biosphere (MAB) Program. In addition, Dr. Vokhiwa was Malawi’s Project Manager and Desk Officer for Malawi National Environmental Action Plan and the Environmental Support Program (ESP) funded by The World Bank. Working with specialists and scientists, Dr. Vokhiwa was responsible for the development of Malawi’s National Biodiversity Strategy and Action Plan (NBSAP) in 1999 with funding from the Global Environment Facility (GEF) through the United Nations Environment Program (UNEP). Throughout his tenure as deputy director, Dr. Vokhiwa was a member of the United Nations Commission on Sustainable Development (CSD) with its secretariat at the UN Headquarters in New York. Before his retirement from the Malawi Government civil service, Dr. Vokhiwa developed, managed, and implemented the Malawi Agrobiodiversity, Participatory Breeding and Gender Project which was funded by the International Development Research Center (IDRC) and Canadian International Development Agency (CIDA) in Ottawa, Canada.

From 2000 to 2001, Dr. Vokhiwa was Regional Director and Representative for the Worldwide Fund for Nature – International (WWF – International), Gland, Switzerland outposted to Harare, Zimbabwe, Africa, where he managed and implemented WWF’s strategic conservation program for Southern Africa.

Dr. Vokhiwa joined academia as Assistant Professor of Biology at Kennesaw State University, where he taught environmental science I and II to non-science majors from 2003 to 2007 when he joined Mercer University. Dr. Vokhiwa is currently a Georgia Governor’s Teaching Fellow from the 2010-2011 intake.

As Team Leader for Mercer on Mission to Malawi, and in collaboration with faculty from the school of environmental engineering and the school of medicine, respectively, Dr. Vokhiwa led students on three service learning projects to Malawi in 2010, 2011, and 2013 where the students worked at two orphanages and watershed sites to address water quality and environmental sustainability initiatives together with the local community leaders.

As Project Director for Mercer University’s Fulbright Hays Group Projects Abroad (GPA) Program award from the U.S. Department of Education for 2012-2014, Dr. Vokhiwa led a team of 10 teachers and two administrators from the Atlanta metro area on four-week field research project to Malawi during 2013 to collect data on “The Interaction of Environment and Culture in Malawi” for their Area Studies curriculum development.”